At a recent EMC World announced that EMC goes towards Open Source. As a result of this new strategy, products such as ScaleIO and ViPR has been transferred to the community. At this time, we can free ourselves install and test both solutions. What really is ScaleIO? It is a universal solution that can work under Linux, Windows and VMware and is designed for large environments. It offers tremendous scalability and performance, if you believe EMC, with a proper number of hosts is the highest performing software defined storage in the world (Converged Server SAN). On this blog installation and configuration of EMC ViPR has already been described. In this article I will deal with installing ScaleIO in our test cluster of three HP DL380 servers (local disk) operating under the control of vCenter 6.0. The entire procedure can also be successfully carried out using any of disks (eg. ISCSI) or in Nested ESXi type environment.

The installation will start from registering in the vSphere Web client ScaleIO plugin. The documentation for ScaleIO missing one piece of information, before we can proceed to install, we need to set the JAVA_HOME variable in the system (at this stage is absolutely crucial). Requires 64-bit Java version 6 upwards. Then run the vSphere PowerCLI, go to the directory where the installation script is and run it. When you choose to install, in the background Tomcat server is started and from it is downloaded and installed the ScaleIO plugin. Whole procedure looks like this: 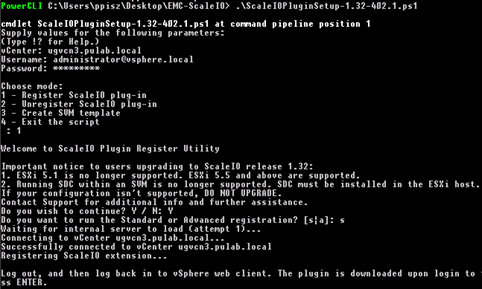 After registering plugin you must log out of vSphere Web Client and log on again (only this step will trigger the installation of the plugin). Before we do, do not press ENTER in the script (in accordance with clear information given on the screen.) When we make sure that the plugin is installed, proceed to the next stage, which is load SVM template.

The ScaleIO VM load procedure is as such:

The next step is to install the ScaleIO Data Client (SDC) driver on each of ESXi. It is supplied as a standard VIB and can be installed manually by vSphere Update Manager or directly from the ScaleIO plug-in. After entering the plug-in, choose the option “Install the SDC on the ESX” and choose our hosts. And now attention, SDC to work properly requires VMkernel on network in which syncs data with other SDC (at this stage is not necessary to add VMK).

After installing the SDC each host must be restarted. Therefore, I suggest using the Update Manager. At this point, we are ready to install ScaleIO environment. But before you run the appropriate wizard, let’s go to advanced settings and Let us now these two options: 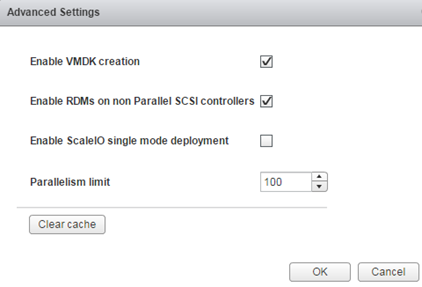 The preferred method of access to local drives on ESXi by ScaleIO VM (SVM) is RDM. If this is not possible (eg. Our RAID controller not support RDM) on the local disk is created VMFS and on it VMDK (Eager zeroed, his creation takes a long time, remember that!) which is connected to the SVM machine. If you do not select the above option, in the ScaleIO installation wizard discs (which not support RDM) will be not  available. Before the next step (it will appear in the next blog post due to the large number of screens), a brief digression on what is installed on each host. 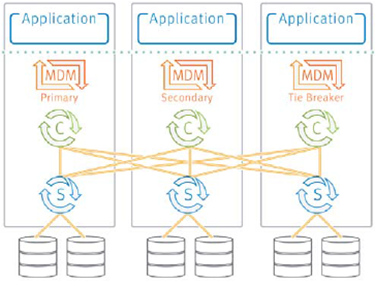 ScaleIO Virtual Machine (SVM) appliance is the services carrier. On each host will be at least one SVM, however, every one will meet a slightly different role. The primary role is a ScaleIO Data Manger (MDM) component. It is a metadata management service and operates in a cluster consisting of three nodes – Primary MDM, Secondary MDM and Tie-Breaker. Tie-Breaker is a witness intended to prevent a split brain error when there is a breakdown in our cluster. Another service is ScaleIO Data Server (SDS) managing capacity and access to data through ScaleIO Data Client (SDC). The last service is ScaleIO Gateway Installation Manager (IM), installed as a separate SVM machine. IM service checks the entire environment before performing operations such as expansion or upgrade.